Story and Photos by Alyssa Small

For the Montana Town Project

Two Rows of Students with brass and woodwind instruments were playing a medly of patriotic songs when a bell rang. None of them moved.

Music teacher Brittany Majerus said it was difficult to change her students’ mindset that class is over when that bell rings — a bell which is meant to warn teachers that five minutes left of class.

“They totally used to just lose their focus when the five-minute bell rang,” she said. “Now, I have their attention until I dismiss them.” Majerus has been teaching music in Plains, Mont., for a year and a half now. As a University of Montana alumna, she took the only music teaching position in Plains: teaching general music to kindergarten through fourth grade, band to fifth through 12th grades and high school choir. Now she teaches all music classes for fifth through 12th grades.

“It’s better to be strict in the beginning,” she said. “Then when you loosen up later, they know you still mean business.”

Majerus, who said she didn’t even know where Plains was when she applied for the position, has been working to revive the music program in the town’s schools.

She said the only way she was able to handle the entire music program in town was that she had an aide, Denise Earhart.

“Our music program had just about died,” he said. “In years past it had been a strong program, and then our teacher left.”

The high school’s band and choir classes were more of small ensembles when she started last year, Majerus said. Now she has an 18-member high school band and an 8-girl choir, and most of her high school students are freshman and sophomores.

Majerus has been trying to increase enrollment and interest in her classes by offering a new class and making the music existing classes study more diverse and, sometimes, more modern.

She has started a percussion ensemble class, made pep band attendance at football and basketball games a requirement for band students, and has taken the choir to the regional choir invitational in Thompson Falls. She has also hopes to start a marching band and to spend Friday choir classes working on show-choir style pop music.

McDonald said Majerus’ efforts are working, and the music class sizes are growing. He attributed the increased music class enrollment to the students’ positive attitudes and to Majerus’ commitment to working through the problems that arise in the class.

“She’s actually teaching them a lot of fundamentals and she’s teaching them the parts, whereas in years past the teacher would just come in and tell them to sing or to play,” he said.

Senior Bethany Mack has played the flute with Plains bands since she was in fifth grade. She said the students get along better with Majerus than they did with the former teacher. 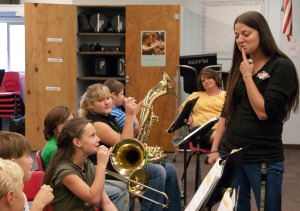 “She gets things done,” Mack said. “She sets a schedule and then she meets it. I’ve never really had that kind of structure [from a music teacher].”

Mack is the high school band’s flute section leader, which means she decides who will play what parts.

Sometimes Majerus steps in to make the decision—but that’s not because the students are fighting for the spotlight, Majerus said.

Majerus said her band students aren’t very competitive with each other, and that often translates to people shying away from the solos or the more challenging parts.

“Typically I end up giving a first part to people who don’t want it,” Majerus said.

Majerus has made pep band a requirement for her high school band students. This is because the students face different challenges in pep band than in concert band, she said.

She added that she thinks it’s important to get the students giving back to the community. Before pep band was a class requirement, Majerus said only four or five people would show up to the games.

“I told the students that they can’t expect the football team or the basketball team to come to our concerts if we don’t go to their games,” she said.

“Not many high schools our size have a vibraphone, marimba, chimes, two drum sets, eight snares, bells, timpani and everything else we have,” she said. “I was so happy when I saw that we did.”

All of those different concert instruments inspired her to add a percussion class to her schedule this year.

The class, which has attracted nine students, started with the basics of percussion and music to make sure everyone was up to speed.

“Half of the percussion ensemble hadn’t even read music before,” she said.

The ensemble gives the students a chance to develop the skills for a wide range of instruments.

“This way they also get to learn pitches, like for the marimba or chimes,” she said. “They can play more instruments in the long run this way.”

Majerus studied the flute throughout grade school and college, but her band background hasn’t kept her from teaching choir well, her students said.

Choir student Dominique Kovar said Majerus is fun and laid-back, and she makes sure the choir is always learning.

Majerus said she has selected music that she hopes will challenge her students. These pieces have been slower and more lyrical, and some have been written in foreign languages like French and Swahili.

“Choir is just a nice balance of having fun and getting stuff done,” she said.

But Majerus said her favorite classes are with the younger kids. “They’re still so excited about the music,” she said. 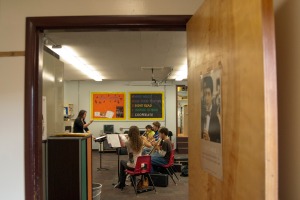 The key to building a stronger music department is helping the students love music enough in fifth and sixth grade to make them want to continue on into middle school.

“That is the hardest thing to do, to get the kids to make that transition,” she said. “If I can get them to stick with music, then I’ll have beat the biggest challenge.”

McDonald said he is confident Majerus ison the right track with the music classes, and he expects the school will reap the benefits from her teaching.

“We’ll hopefully be back among some of the best programs in the area soon,” he said. 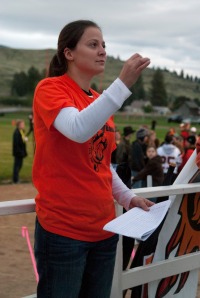 Alyssa is available for freelance designing, editing, photography or writing. Please find her contact information on her resume.